Native American individual dancing has been a major source of pride for Tsali Lodge for the last few decades. Many of the Scouts and Scouters have taken up the mantle of preserving the culture and traditions of the Native American alive through both dance and education.

Tsali Lodge dancers participate in several Native American themed events throughout the year including the highly educational and fun Carolinas Indian Seminar which Eswau Huppeday Lodge hosts every January as well as competing against other Arrowmen at Fellowships, Conclaves, and National Order of the Arrow Conferences.

There are several styles of dance to choose from, and the styles which are recognized for competition purposes in the Order of the Arrow are noted below. 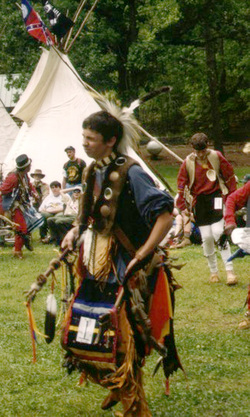 The outfits are an older style of dress. Men may wear a smaller style of feather bustle, or bustle where the feathers hang down in the back. The beadwork is most commonly floral in the Great Lakes region, featuring tribally specific stylized versions of art and movement. Many older people familiar with Pow-Wows can identify the Nation and area a person is from just by looking at the outfit. 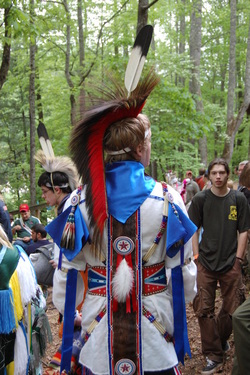 The overall effect is of reassuring solidity, with everything closely matched and coordinated. It looks as if it is planned all at one time. 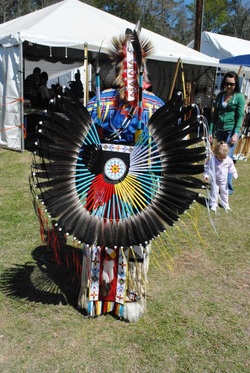 The Northern Traditional Dancer is a modern evolution of tribal outfits from the tribes of the Northern Plains such as Sioux, Blackfoot, Crow, Omaha and others. Below is some information about the outfit's parts. It must be stressed that this is only a brief description as variations do exist from area to area and from tribe to tribe. Careful observation and research be undertaken before starting to construct this type outfit. 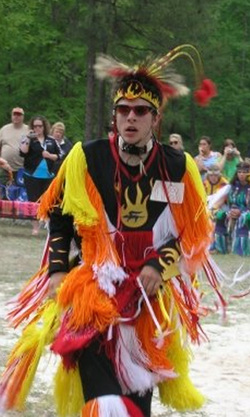 Originally done as a Warrior Society Dance, it has evolved over the years. It has further evolved into a highly-competitive form of northern dancing. Grass Dancers always stands out by virtue of two things: his dancing style and his outfit. His dancing has been described often by these words:" gutsy, swinging, slick, old-time," etc. 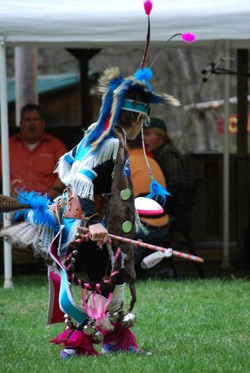 Most recently making inroads into central United States, this style of dance has very old origins in Northwestern United States and areas of Southwestern Canada. The dance comes to us from the Blackfoot people. Many dancers of other Nations have been inspired to take on this style of dress and movement. The Chicken Dance style is usually depicted in dress by the prevalent use of pheasant feathers in the regalia. Dancers use feather bustles worn on the upper back, and creative ornamentation unique to their Tribe but stylized to reflect the influences on the original regalia type. Many dancers will use vibrant colors to highlight their designs and feather work. Their movements can distinguish the dancers during specific songs created for their dance discipline. These moves highlight movements reminiscent of the Prairie Chicken mating dance. 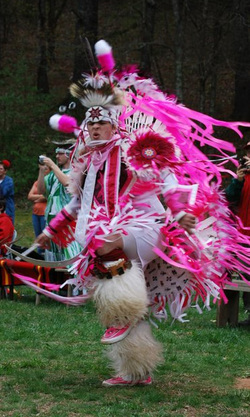